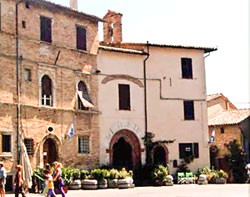 Due it's commanding position dominating the ample valley of Perugia and Spoleto, Montefalco is nicknamed "Umbria's Balcony". This well deserved title is also attributed to stunning views seen at every turn.

Originally called Coccorone, it was re-named to Montefalco in 1249 after being conquered by troops lead by Frederico II. Montefalco means the "Mount of the Falcon" and the falcon emblem naturally became it's official seal. 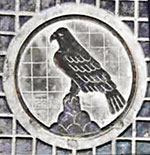 Most parts of the modern day town are still enclosed within the encirclement of original walls constructed in the 14th Century. These walls are surmounted by towers supported by corbels and crowned with Ghibelline crenellations along the top.

Montefalco is considered a primary sanctuary of art for both Umbria and Tuscany. Many of these master pieces can be seen at the Church of St. Francis which today contains the important Museum and Picture Gallery. 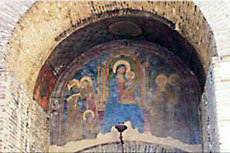 A little outside of town is the fascinating convent of San Fortunato. The origins of this edifice date back to the 4th Century, even if the building which stands today is the result of a 15th Century reconstruction. The portal is decorated with a fresco by Benozzo Gozzoli, who also painted the S. Fortunato and the Virgin and Child seen in the interior.

Characterized by distinctive, medieval features and elegant architecture, it is not surprising that today, the local economy of this charming, medieval backwater primarily focuses on tourism. The handicraft business, specializing in the manufacture of fine textiles, also contributes substantially.

The world famous red wine, Sagratino di Montefalco, is produced from grapes grown only in this locale. This wine is arguably one of the finest of the entire region, if not the world, and cannot be left out of any serious discussion pertaining to this multifaceted community.