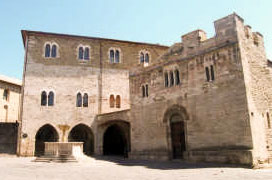 With so much to see while visiting Italy, Bevagna could be easily overlooked. Nontheless, your travels in Umbria will be incomplete without at least a quick glance at this fascinating Umbrian town, inhabited since the Iron Age.

Situated only 35 km from Perugia and 148 km from Rome, Bevagna is conveniently reached by car while traveling in Umbria. Centrally located between two important centers in the region, Foligno and Todi, Bevagna can be considered a reasonable side trip from either. Romanesque churches and impressive mosaics at the site of an ancient Roman hot bath present an opportunity for sightseeing in Italy, not readily available in other locations in Umbria.

The Gaite Fair held the end of June is one of many Festivals in Italy worth a side trip. Olde World crafts are brought back to life while the various fractions of the town compete for the most authentic costumes and displays of ancient skills. The experience of this gregarious Italian celebration will not only expand your understanding of Italian culture but will prove a fascinating diversion on your to trip to Italy.

Bevagna is surrounded by ancient walls which, though typical of the locality, are particularly rich with towers and bastions as well as medieval gates. These provide entrance into the historic center of the town which brims with charming shops of Italian artisans and interesting monuments. Above all, stop to appreciate the splendid "piazza" or town square with both religious and civil edifices surrounding an open courtyard. The existing town corresponds almost exactly with the original medieval layout while scattered Roman columns, artifacts and ornaments add authenticity to its medieval style.

In recent times, urban development has extended beyond the town walls, and has incorporated land which previously constituted a part of the Roman city. Today Bevagna has approximately 6000 inhabitants.