Todi, today with only 17,000 permanent residents, is one of the emerging hill towns. It still functions as an agricultural center but is increasingly becoming a tourist destination. Iron Age remains suggest 3000 years, or more, of continual habitation.

t is believed that, in ancient times, the area was occupied, not by Etruscans but by another tribe of Italic origin, the Umbrians. The Etruscan tribes, settling across the Tiber River, inhabited Perugia and Orvieto. There remain, none the less, many Etruscan influences as demonstrated in the ancient tombs near Todi. These gravesites have yielded some fine treasures, the most famous of which is an image of Mars. A copy of this figure can be seen in the local museum in the Palazzo del Capitano in Todi’s historic center. The original bronze statue is now located in the Vatican museum in Rome.

Todi was developed in 3 epochs, Pre Roman, Roman and Medieval producing a ring wall for each of these eras. The construction of the first period, still evident in various locations, consisted of huge travertine blocks placed directly one on top of another, using no mortar. Coins bearing the name Tudare suggest a town of some importance during pre Roman rule. The name means "border" and Todi, encircled by its defensive ring of walls, was one of several outposts used by the inhabitants to fortify their stronghold along the Tiber. 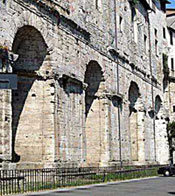 The town was under Roman rule around 89BC during which the second set of walls was constructed. Until this time, the city existed on two adjacent hills where now are located the Church of San Fortunato (named for the patron saint of Todi) and The Duomo, located in Piazza del Popolo (the main town square). The Romans built travertine retaining walls at the east and west ends of the town. This explains the presence of the "Nicchioni", today seen from the Mercato Vecchio.

Six huge cisterns were constructed in the space recovered between the original hills and water from local springs was collected for public use. Occasionally, the local speological organization conducts a guided tour of the underground cisterns and passages, located beneath the main square. Ask at the Tourist Information Office to see if a tour might be planned during your visit. 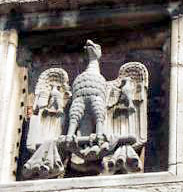 The newest ring of walls was built in 1244 and for the most part remains intact. The gates, Porta Perugina, Porta Amerina and Porta Romana, still function as the access and egress for the city. They originally divided the medieval community into 3 separate districts. From the 3rd century, the city was further divided into 6 regions which form the present day town.

The town’s heyday was in the 13th century. As one of the Region’s first free communities, Todi managed to annex Amelia and Terni and to build a third set of walls. Tradition has it that the town was first founded where an eagle dropped a tablecloth snatched from a local family. The eagle with a cloth in its talons became the town’s insignia. The 2 protectorates can be seen on this emblem, represented as two smaller eagles under the sheltering wing of a greater and more powerful defender.

The main buildings surrounding the town square include the Palazzo del Popolo, Palazzo del Podesta and the Palazzo dei Priori, all constructed during this era. Subsequently, a period of decline was interrupted briefly by a 16th century prosperity that produced the great Renaissance church, Santa Maria della Consolazione. By the end of the 18th century, there were as many as 548 churches within the confines of the territory of Todi.

Today, Todi has been designated as one of 33 towns throughout Italy deserving of the title of "Citta Lenta", meaning deliberately unhurried and leisurely. The town has therefore made a conscious effort to preserve its heritage and maintain an unruffled lifestyle, keeping modern day disruptions in check.