Spoleto is an essential destination on your Italian travel itinerary. Visiting this unique Italian town gives you a "one stop" opportunity to experience many aspects of Italy's culture. The history of Italy is evident in the numerous monuments and archeological sites and sampling the traditional Italian cuisine is cause alone to visit this charming Italian city.

Situated on a sunny hillside at the lower border of the Valle Umbra, the center was founded by the Umbrians with Etruscan influences. It became a faithful ally of Rome in the latter's struggle against the Carthaginians.

After the fall of the Roman empire, Spoleto was the capital of a flourishing Lombard duchy. Subsequently becoming a papal possession, it turned into a favorite residence of the popes only to be subdued by Perugia during the famous battle between the Guelphs and the Ghibellines. In the second half of the 14th century, Spoleto and Todi formed an allegiance against the excessive power of the popes but they were subdued and Spoleto was entrusted to the infamous Lucrezia Borgia. The town was annexed to the newly formed State of Italy on September 17, 1860. 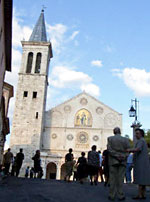 The present day historic center of Spoleto incorporates a thriving cultural and tourist trade intermingled with fascinating remnants of Italian antiquity. Colorful street scenes abound, merging with Italian architectural wonders such as the well preserved, first century AD ruins of Roman amphitheater which can be viewed in Piazza della Liberta. The ancient walls still surrounding much of the city date back to the 6th Century BC and are probably the remains of a defense system devised by the first Umbrian settlement.

Nearby in the Piazza Fontana look for the arch marking the entrance to the old Roman Forum. The famous Duomo cathedral displays examples of Italian architecture, styles from Romanesque to Renaissance.

In the 11th century huge stone blocks salvaged from Roman structures were used to construct the bell tower. Dominating the city is La Rocca, a former papal fortress. Until 1982 it was a high security prison and housed such unsavory characters as Pope John Paul II's attempted assassin. The Ponte delle Torre (Tower Bridge) was originally an aqueduct. It was probably built over an existing Roman structure and was completed at the turn of the 13th Century.

By all accounts, Spoleto's archeological and artistic elements are among the highlights of the Region. Almost all of the fascinating sights are within easy, walking distance from the city center and enticing shops and restaurants specializing in traditional Italian food are found throughout. Italian cultural events, such as the Carnival of Spoleto (February and March) and the Festival of Two Worlds (June and July) have long been a part of the town's heritage.

The excellent Italian cuisine based on locally grown truffles and other specialties such as "stangozzi" (A particular kind of homemade pasta) provide even more impetus to visit on your next trip to Italy.

Surrounds: The nearby Valnerina is a beautiful area running along the Nera river. For those interested in hiking in Italy, the Valnerina is the place for you. Stretching northeast to the barren summit of Monte Sibilla in neighboring Le Marche, it gives you a good sampling of the areas natural beauty. There are several good Italian hiking books available including 20 Sentieri Ragionati in Valnerina (In Italian), 20 well thought out routes through the Valnerina.