Culture and History of Umbria
(Excerpts taken from the Brochure on Art and Culture published by the Agency for the Promotion of Tourism in Umbria, 2000.) 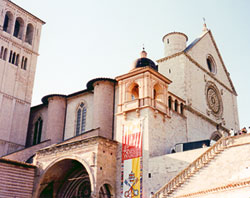 The appearance of Umbria has changed markedly throughout the centuries and the current regional borders were established as late as the early 1900's. From its first appearance in historical archives, Umbria has been divided into two factions which, over the centuries, characterized the formation of these regional boundaries. To the West of the Tiber River were the lands of the Etruscans, an advanced and worldly tribe due to their interaction with other Mediterranean people. The more isolated clans of the East were settled by Italic populations, the Umbrians.

Visit links to the right for a tour through the history of Umbria.

Twentieth Century Umbria
Twentieth century Umbria welcomed the Industrial Revolution and Terni became known as "The Manchester of Italy." The difficulties in integrating the ancient with the modern were already felt in 1927 when Terni became a provincial seat. A redesign of the cityscape became imperative after the devastating bombings of WWII. The work of reconstruction resulted in the most systematic episode of urban planning in the Region.

The Etruscans
The Romans
Romanesque
Renaissance