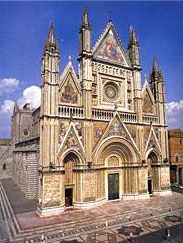 Your travels to Umbria would certainly be incomplete without at least a day trip to the fascinating Italian town of Orvieto. The main draw here is the amazingly elaborate and intricately designed Duomo. The construction of this glittering gem began in 1290 but was not completed until the 17th century. Constructed on the site of a previously existing cathedral, the facade is a stunning example of decorative Gothic style and includes a beautiful rose window. The sides and the interior are composed of alternating layers of black basalt and pale limestone.

Interesting boutiques, "piazze" (town squares) and mysteriously winding streets make it a delightful city for meandering. Tempting Italian specialty shops compete with uniquely Italian handmade ceramics, wrought iron products and detailed wood carvings. You won't be around long without also discovering the famed Italian wine, Orvieto Classico, which is produced here and can be enjoyed at a wine tasting or combined with a sampling of the delectable Umbrian cuisine. After your feast, the beautiful main square gives you the perfect excuse to relax while people watching. 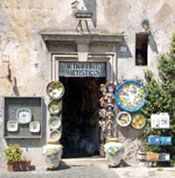 The Etruscan civilization was conquered by the Romans and the natural communication networks of nearby roads and rivers exploited. Due to it's strategic and easily defensible position Orvieto became a favorite refuge for the popes and enjoyed a flourishing artistic and cultural period thanks to local aristocracy and the prelates. Orvieto became an important administrative center under Napoleon Bonaparte. Subsequently it was annexed to the newly formed Kingdom of Italy in 1860.

Situated near the border to Lazio, Orvieto perches on a jagged cliff keeping vigilant watch over the slumbering valleys below. Like it's neighbors, Orvieto has been populated since remote times, with the Etruscans its earliest know inhabitants. A remarkable amount of archeological remains have been discovered here and several Etruscan tombs are available for viewing.