This charming and ancient hamlet is conveniently situated near Perugia and Assisi, on the southern slopes of Mt. Subasio. The name Spello may have come from the word for mirror in Italian, "specchio" indicating the reflection of the towns profile in the previously water laden, marshy lowlands. 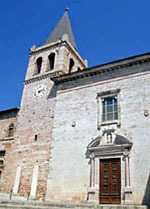 With features dating back to Roman times, Spello is steeped in art, history and architectural splendor. The medieval nucleus blends perfectly with Renaissance buildings while the enchanting piazza beckons for a respite complete with a gelato from the nearby gelateria. Wandering the narrow,cobbled and winding streets transports you to days of old, passing quaint shops and tempting trattorias.

Founded in the age of the Umbrians, Spello became a flourishing colony during the age of Constantine. The Barbarian invasions brought about a steady decline which continued until the Dukes of Spoleto took control. In 1360, Spello briefly became an independent state only to then fall under control of the church and subsequently to the city state of Perugia. Finally it became a part of the Papal States in 1583. In 1833, the title of in dependant city state was once again bestowed and so it remains to this day. 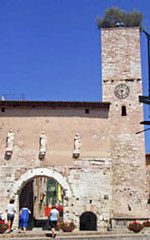 Today Spello thrives, as do many of its neighbors, due to a healthy tourist trade. Textile weaving is a principle craft of the area as is lace production and embroidery. Spello is noted for quality wood working products, particularly of olive. The reddish stones quarried from St. Subasio can be seen frequently in use in local construction, testimony to the fact that stone work remains a major trade.

The town sponsors several festivals of particular note. In February the Festival of the Olive and of the Bruschetta feature dancing, popular music and, of course, tasting of the local oilve oil and other gastronomic specialties. Not to be missed is the Celebration of Corpus Christi, The Infiorati, held in June in which intricately designed carpets of flower petals, leaves and seeds line the streets. In the later part of August, a celebration of music, art and theater enlivens the city once again.

Also worth a glimpse, the nearby, yet isolated village of Collepino. Its seclusion high on the slopes of Mt. Subasio makes it seem a relic from an ancient time capsule complete with folklore and misty legend.