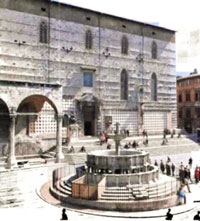 The capital city of the region of Umbria, Perugia, is extremely important in artistic and monumental terms. Prehistoric finds have proven the existance of remarkably ancient human settlements here. Between the 6th and 5th Century BC, Perugia was one of the 12 key cities of the Etruscan federation. It went on to become an important Roman center after the epic battle of Sentino in 295 BC which brought an end to the Etruscan dominion.

The Roman Emperor, Augusta Perusia, named the town for himself after winning a bitter civil war and subsequently rebuilding the city. Perugia became a part of the Kingdom of Italy in 1860. Today it is a thriving municipality, attracting new residents, students and tourists alike. 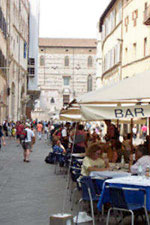 Corso Vanucci is tha main thoroughfare of the city and is lined with buildings of great architectural merit. The street runs south to north from the Piazza Italia to the Piazza della Republica, terminating in Piazza IV Novembre.

Also a major shopping area, shops sporting the finest Italian wares and the most current fashions are a main attraction. This is the street along which tourists and residents alike partake in their usual evening "passigiata" or leisurely stroll.

Among numerous points of interest, the Town Hall or Priors' Palace is of particular note. It is an outstanding example of medieval architecture and is considered to be among the most elegant an famous in all of Italy. 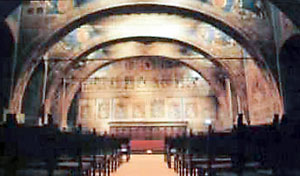 Perugia was the home of the fresco painters Bernardino Pinturicchio and Pietro Vanucci (known as Perugino) who was to become the teacher of Raphael.

The Universita' per Stranieri, established in 1925, offers courses in Italian and attracts thousands of students from all over the world.

In addition, the town is the home of the mouth watering chocolate known as Baci.The EuroChocolate Festival, celebrating this and other delights is a chocolate lovers paradise in October. The world renown Umbria Jazz Festival attracts international performers in July.