History of Umbria - The Roman Conquest
(Excerpts taken from the Brochure on Art and Culture published by the Agency for the Promotion of Tourism in Umbria, 2000) 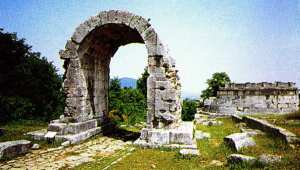 With the Roman defeat of the Etruscans in the battle of Sentium in 295 BC, cities, land reclamation projects, road networks and the settling of centurions began to make a profound mark on the countryside. During this time, Umbria was crossed by a famous consular road, The Via Flaminia, connecting North to South. Not surprisingly, the way stations along this route quickly became thriving and densely populated towns. When the Via Flaminia was supplanted by a more Easterly route, most of these communities fell into decline.

The city of Carsulae (near San Gemini), was then further destroyed by the Barbarians who used the deserted road to access Rome. Carsulae today is fascinating to visit as it retains the ruins of the buildings surrounding the Forum, the entertainment quarter, the triumphal arch marking the exodus of the town and monumental tombs which were placed along the main entrance road according to Roman custom.

One of the greatest emblems of Roman civilization remains the defensive city walls frequently constructed along the same line and even on top of the preexisting walls remaining from the Etruscan dominion. Among the best preserved of these wall can be found in Spello, having towers and gateways that still today retain their original form while several of Todi's walls show the original structure of the Etruscan wall underlying the Roman construction.

Culture Index
The Etruscans
The Romans