History of Umbria - Renaissance to 18th century
(Excerpts taken from the Brochure on Art and Culture published by the Agency for the Promotion of Tourism in Umbria, 2000) 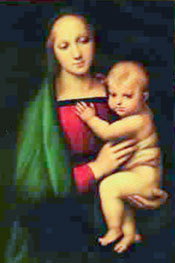 The appearance in Umbria of the Renaissance came concurrent with important political events of the numerous towns of the Region. Umbria contains some of the best testimonies of 15th and 16th century Italian Renaissance painting including a contribution of Fra Filippo Lippi who painted the apse of the cathedral in Spoleto. This work thereby spread a style destined to have profound influences on the painting of Southern Umbria.

The highly innovative style of Perugino, while adhering to the Renaissance form was not limited to painting alone. The "Perugia 1500" style is also found in wood carvings, textiles and in majolica ceramics, primarily that of Deruta. Today this production is documented in Deruta's Museum of Ceramics which offers a view of ceramic manufacturing from its origins to the techniques of today. Particular attention is given to the Renaissance production of lustre ware, majolica made with a technique derived from the Middle East, in which objects display an iridescent effect.

Perugia again came to the fore front in the creation of a new style of art that would have widespread influence. Perugino's workshop proved to be a testing ground for the young Raphael and the unique style would reverberate through generations of followers.

In the 1500's the individual city states were subjugated to papal power. In 1540 a tax was imposed on salt and in defiance, the Region boycotted all but the most essential use of this condiment. To this day, traditional Umbrian bread is baked without the use of salt.

In Perugia the imposing Rocca Paolina was constructed to assert the dominion of the church. This powerful fortress was constructed right in the heart of the town and entailed massive demolition obliterating the existing roads and structures of the Baglioni quarter. Of course, this definitive shift in power effected artistic ideals and the artistic history of the area became a part of the wider events spreading from Rome to Ferrara.When Umbria was annexed to the Kingdom of Italy, the Rocca was razed in the name of newly acquired liberty.

Architectural styles also were changing as can be seen in the construction of the Consolazione in Todi and the ornate Duomo in Orvieto. The palaces of noble families began to dominate the the towns in the 17th and 18th century, forever changing the face of the medieval villages.