Culture of Umbria - The Etruscans
(Excerpts taken from the Brochure on Art and Culture published by the Agency for the Promotion of Tourism in Umbria, 2000)

From its first appearance in historical archives, Umbria has been divided into two factions which, over the centuries, characterized the formation of these regional boundaries. To the West of the Tiber River were the lands of the Etruscans, an advanced and worldly tribe due to their interaction with other Mediterranean people. The more isolated clans of the East were settled by Italic populations, the Umbrians. 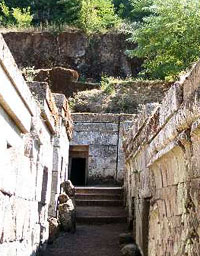 Orvieto and Perugia were the corner stones of the Etruscan dominion and the high level of organization achieved by this ancient populace is evidenced in the remains of mighty city walls, gates and wells found near Perugia. One of the most outstanding Etruscan archeological sites yet in existence can be found in Orvieto at the Crocifisso de l Tufo Necropolis. This Etruscan tomb dates from the mid 6th century BC to the 3rd century . It consists of several burial chambers situated among sepulchral roads where the name of the dead is etched in stone (unquestionably final) at the entrance of the tomb.

The geometric layout of these "Cities for the Dead" provides an excellent opportunity for the study of ancient urban planning methods. Many of the funeral accessories have been lost to other museums and undoubtedly vandals. Valuable archeological finds from this period, however, can still be seen in the National Archeological Museum in Perugia and in the Civic and Claudio Faina Museums of Orvieto.

The Hypogeum of the Volumni Etruscan tomb belonged (predictably) to the Velimna family and can be found just a few kilometers from Perugia. The subterranean structure follows the floor plan of an aristocratic Greek villa and contains numerous valuable and fascinating artifacts including the cinerary urn of the head of the family, Arunte Volumnio.

The Sorbello Well was named after the monument which was built above it in the 17th century. This Perugian reservoir served as the primary source of water for the Etruscan people of the city. Excavated in the 3rd century, it reaches a depth of 36 meters from present day road level and has a diameter of 5.6 meters. The capacity is thought to be approximately 430,000 liters of water.