Culture of Umbria - Romanesque-Byzantine era
(Excerpts taken from the Brochure on Art and Culture published by the Agency for the Promotion of Tourism in Umbria, 2000) 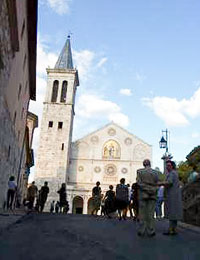 With the fall of the Roman empire, the area was ravaged first by the Goths and the Byzantines and then finally by the Byzantines and the Lombards Duchy. The presence of valuable religious edifices and hermitages particularly notable in Byzantine Perugia and Spoleto, the capital of the Lombard Duchy, attest to the new found importance of the Christian religion and, of course, its nascent political role. Further reorganization of the church in the 8th and 9th century inspired the establishment of churches and parishes in nearly every village. These, along with the commissioning of the greater urban cathedrals, became the nuclei of new territorial divisions and city states.

During the 12th and 13th centuries, the Romanesque-Byzantine culture became highly visible and the restoration of the papal dominion was tangibly seen in the construction of a complex system of fortresses which to this day make their presence felt in many of the towns. Bitter conflicts between papal power and individual city governments afforded the rise to power of families such as Fortebracci and Malatesta. These aristocratic families dictated the tastes prevailing in wealthy Italian courts.

The blossoming of the Romanesque culture in the area surrounding Spoleto gave impetus to more construction and decoration. Numerous examples of sculpted decorations of church facades probably explains the presence of ubiquitous workshops in Spoleto which produced painted crosses and altar frontals. 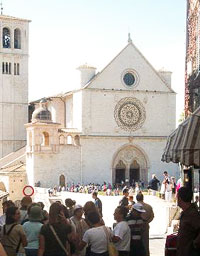 Throughout Umbria but particularly in Assisi, St. Francis clearly made his mark. Work on the new basilica honoring him was initiated scarcely two years after his death. Some of the most famous artists of this period are represented here. It was particularly with Giotto, "unsurpassed narrator of the human vissicitudes of the Saint that the Franciscan message of a new humanity found its most eloquent expression". The invention of a distinct pictorial language, inspired by visible reality, spoke to the illiterate masses where the written word and the Latin masses could not. The events connected with Francis and his movement dramatically effected all of Umbria and hermitages and settlements founded by his diciples dot the entire region.

Furthermore, the grafting of the new Gothic style on Romanesque forms represented in the Basilica of Assisi became an architectural paradigm for buildings of similar style through out the region. 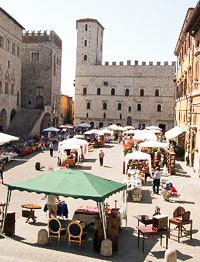 It was with the redesign of the town squares, however, that the Umbrian city states demonstrated their true genius in the field of urban planning. The Medieval square combines and intefgrates both religious and secular symbols of power; the cathedral, the greatest manifestation of sacred dominion and the town hall, displaying the new authority of the Commune or city government.

The town square in Todi, seen right, combines the 3 important halls, that of the People, the Captain of the Guard and the Priori, together with the spectacular cathedral and attached Bishop's Palace enclosing a magnificent open space for public gatherings and festivals.